As you know I have had major issues with my website over the last few days. Last Friday when I came to write the post about square 14 everything vanished during an automatic WordPress Themes update. As you can imagine I was in shock…first I cried and then I got angry when, after I spoke to my web host provider to find out this was a WordPress problem, WordPress themselves didn’t want to know and simply passed the buck back to host provider.

After a considerably long phone call back to them, and speaking to a very nice and helpful chap, he suggested to delete the theme I was using (even though I had paid for it) and try a different theme. Hence the website has a new look which might change over time as this one doesn’t give me as many options as I would like.

Having managed to retrieve my content and most of my photos I came across the next problem of not being able to upload any photos. I send another request of help to WordPress, but when I got up with the birds this morning I still hadn’t heard anything back (that,s 2 days later). So I sat down with a good strong cup of tea and thought about it all a bit more and did this: Some research into Internet Explorer versus other browsers found that Internet Explorer 10, which I was using without me knowing as it had updated itself automatically, seems to be causing many problems. I deleted said browser and installed Google Chrome and blow me down… it all seems to be working.

The Moral of this story…if you want anything done best do it yourself as it’s the only sure way to fix it!

I hope I am back on track now and that you will bear with me during the next few weeks whilst I try and get this site back to the way I like it.

and finally here is square 14… 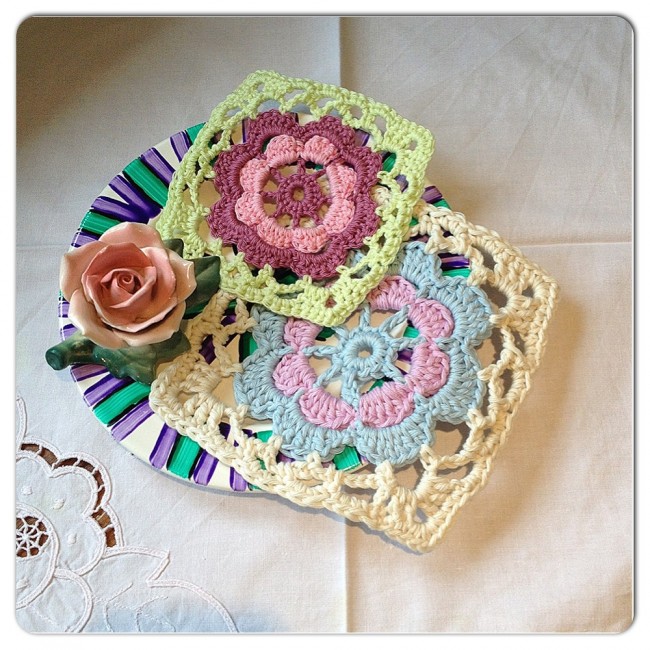 Fasten off, join in new colour at any 3ch loop.

Fasten off, join in first colour between 2dc’s from prev. rnd.

Fasten off, join in new colour in 2nd tr from prev rnd.